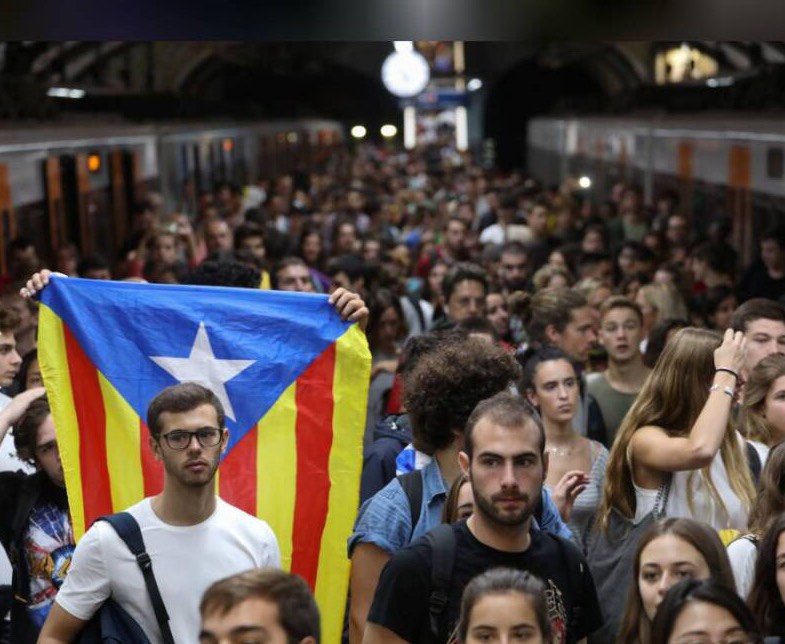 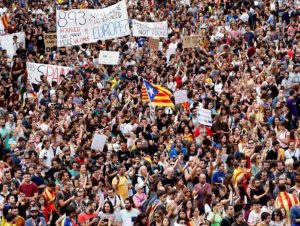 The televised speech, a rare intervention by the 49-year-old monarch who is normally silent on politics, was a sign of how deeply Spain has been shaken by the Catalan vote and a police crackdown that injured 900 people. 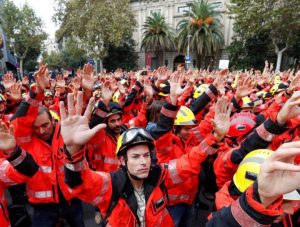 On Tuesday tens of thousands of Catalans demonstrated in the streets of the northeastern region against action by the police who tried to disrupt Sunday’s vote by firing rubber bullets and charging into crowds with truncheons. 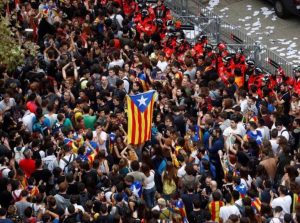 The referendum and its aftermath have plunged Spain into its worst constitutional crisis in decades, and are a political test for Prime Minister Mariano Rajoy, a conservative who has taken a hard line stance on the issue.

Late Tuesday Catalonia’s leader, Carles Puigdemont, told the BBC that the region will declare independence in a matter of days. 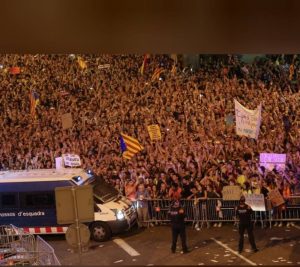 Pro-independence parties who control the regional government staged Sunday’s referendum in defiance of the Constitutional Court, which had ruled that the vote violated Spain’s 1978 constitution which states the country is indivisible. 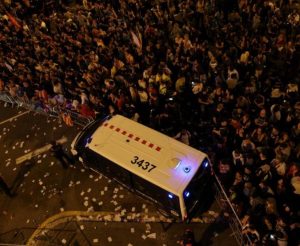 Catalonia, Spain’s richest region, has its own language and culture and a political movement for secession that has strengthened in recent years.

Those who participated in Sunday’s ballot voted overwhelmingly for independence, a result that was expected since residents who favor remaining part of Spain mainly boycotted the referendum. Catalan leader Carles Puigdemont has said the result is valid and must be implemented. 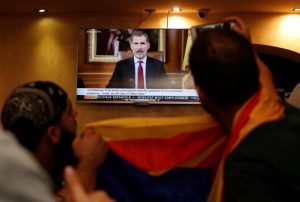 Patrons in a restaurant watch as Spanish King Felipe makes a televised address to the nation in Barcelona, Spain, October 3, 2017. REUTERS/Yves Herman

Outside of Catalonia, Spaniards mostly hold strong views against its independence drive. In his televised address, the king said the “irresponsible behavior” of the Catalan leaders had undermined social harmony in the region. 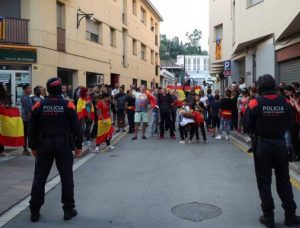 “Today Catalan society is fractured and in conflict,” he said. “They (the Catalan leaders) have infringed the system of legally approved rules with their decisions, showing an unacceptable disloyalty towards the powers of the state.”

The king said the crown was strongly committed to the Spanish constitution and to democracy, and underlined his commitment to the unity and permanence of Spain. He had earlier met Rajoy to discuss the situation in Catalonia. 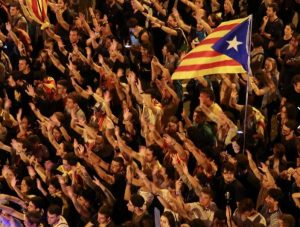 Opinion polls conducted before the vote suggested a minority of around 40 percent of residents in the region backed independence. But a majority wanted a referendum to be held, and the violent police crackdown angered Catalans across the divide. 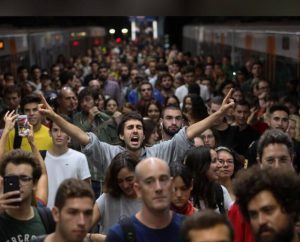 “I‘m not in favor of independence, but I‘m against repression,” said Erwin, a 25-year-old pilot at one demonstration, wearing a Spanish flag. One of his companions was wearing the red-and-yellow striped Catalan flag.

Several demonstrations unfolded across Catalonia on Tuesday. To the north of Barcelona, a line of tractors moved down a road blocked to traffic, accompanied by protesters chanting “Independence!” and “The streets will always be ours!”

FC Barcelona, the city’s football club, joined the strike, saying it would close for the day and none of its teams would train. Carmaker SEAT (VOWG_p.DE) was forced temporarily to shut a production line when a road closure cut supplies.

“What happened on Oct. 1 has fired up independence feeling that will never die,” said 18-year-old student Monica Ventinc, who attended a protest on Tuesday.

On financial markets, Spain’s 10-year borrowing costs hit their highest level in nearly three months as tensions between Madrid and Catalonia spilled on to the streets.